I hope everyone will pardon my distracted mental state these days as my mind continually slips away to this question: “What was I doing last week at this time?”

This is because I spent last week doing what many children and teen authors love best in the world: speaking to students. Firing them up about books, stories and the written word.

This “firing up” happened while I was traveling through northern Alberta as one of sixteen authors, illustrators and storytellers who participated in the 2016 Wordpower tour, which was sponsored by Cenovus Energy. 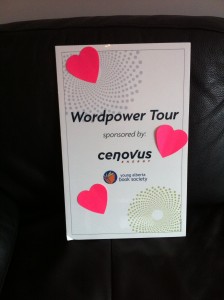 Many thanks to Cenovus Energy for again sponsoring Alberta’s Wordpower tour.

Alberta’s kids’ book-touring scene is distinct in that professional artists can not only apply for the Canadian Children’s Book Centre’s “TD Week” tour, but we also have a provincial counterpart through an Edmonton-based organization called the Young Alberta Book Society (YABS).

For the past several years, YABS has organized the one-week Cenovus Wordpower tour, which is dedicated to fostering a love of literacy among Alberta students by bringing them in contact with professional artists from the province.

I was fortunate to be part of this year’s Wordpower tour and I went in GANGBUSTERS! I hope the students learned tons from my presentations and writing workshops. I learned TONS from them too–so much so that I can’t convey everything in just one post…. hence the “part one” status of this week’s multi-day post.

So for today’s instalment, here’s the first thing that I learned:

It’s hard to present to students when you’re crying.

To be clear, the students didn’t do anything bad to make me cry; rather, the students of Le Goff School at Cold Lake First Nations did something all-out wonderful and unexpected and powerful.

But I need to back up a bit first…

While Le Goff teacher, Ms. Christine, helped me rearrange her room for my presentation, she also taught me some words in Dene. I practised and practised and could finally say ‘hello.’ (It sounds like “ay-GLOHN-its-ay.”) To my surprise, when I said it to the students, they not only understood what I was saying BUT THEY SAID IT BACK TO ME! 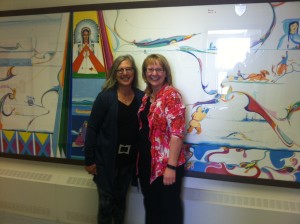 I told them they were making me feel very welcome and that at my home, we sometimes greet people in French by saying ‘Bienvenue.’

Then came the magical question from one of the teachers: “Would you like us to sing for you?”

WOULD I??? There is of course only one answer to that question. So out came the guitar and next thing I knew, the students and their teacher were singing me an amazing “welcome song” in English, Dene and in Cree. The beauty of the song combined with the light and the pride in the students’ eyes were overwhelming and, well, I think you know what happened next.

I learned that this musical greeting was in honour of me having traveled to share my stories with them and because they wanted to wish me a continued safe journey.

Wow. Just, wow. And like I said, it’s hard to present when you’re crying. The students however graciously waited me out until I could share my stories with them in return.

One of my stories involved a farm adventure from my childhood years and it included farm animals. The students tried to teach me the Dene words for the various farm animals and they only giggled a little at my best efforts to say them.

As it is, the only animal name that I had much success saying was a word that sounds like “goo-goose,” which does NOT mean ‘goose’ as I thought, but PIG. Clearly I need to return for more lessons at Le Goff. 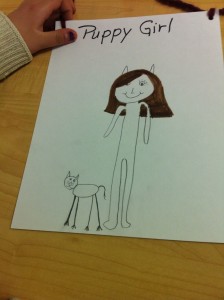 The students were an enormous amount of fun and the younger group joined me in transforming into superheroes. The world already feels like a kinder, better place.

Along with the hand shakes, hugs, and open invitation to “please return whenever you are in the area” (you bet I will!), my time at Le Goff School–crying and otherwise–was magical and will forever live in my heart.

To all of the fabulous students and teachers at Le Goff School, a big ‘mass-ee’ (with apologies for mis-spelling ‘thank you’ in your beautiful language).