Every race is its own story.

That thought has been at the forefront of my mind while running dozens of races over the past ten years. So while I’ve been running the various courses, I’ve also been sizing up the athletes around me and speculating about the stories that each brought with them that day.

But today, that didn’t happen. Today, I had more than enough “story” of my own to process.

For the first time in six years, I wasn’t running the full 21.1 km of my beloved Hypothermic Half Marathon. Instead, I was running a short leg of it as a member of the KwadSquad – a push-team dedicated to helping individuals with physical disabilities experience an endurance event that they would otherwise be precluded from.

Unable to run the Hypothermic Half Marathon because of a slow-healing injury, but with “a few kilometres in me” notwithstanding, I had been invited to join the KwadSquad team. Specifically, I’d been honoured with the opportunity to run the final distance with the team and to push Raminder, who suffers from cerebral palsy and cannot walk, across the finish line in her chair. 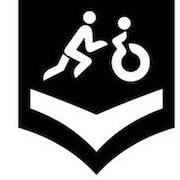 This situation was the result of several people whom I consider “angels.”

The first angel is Morrie, a dedicated member of the KwadSquad. Himself a survivor of a potentially devastating accident, Morrie has since gone on to run the Boston Marathon, and also to carry several physically-challenged friends through endurance events, including half marathons and even a half-Ironman triathlon.

Raminder – also an angel – has now completed several events with Morrie. Only the briefest conversation with Morrie is required to understand the extent to which Raminder, along with her friend and roommate, Chandra, inspire him. I now understand why… but more about that later. 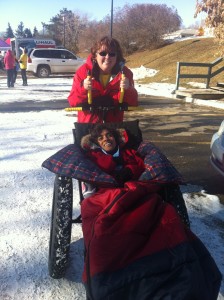 Becky, who is Raminder and Chandra’s caregiver, is adamant that one must NEVER feel sorry for these two women; that their lives are varied and meaningful and filled with constant opportunity. What Becky is less forthcoming about is the extent to which she makes these opportunities happen through her dedication and vigilance to their needs. As I saw today while riding in the support vehicle, Becky is a fierce, kind-hearted advocate for them.

Tanis, yet another angel, is a strong runner who has participated as a push-chair athlete for several events alongside Morrie and Raminder, including the Rotary Run For Life in September 2015 when I first saw the KwadSquad in action. Tanis’s role today involved running and “pushing” with Morrie, while being a second set of eyes to ensure that Raminder’s health and safety needs were met throughout the event.

And finally Justin Ng, the Edmonton Area Event Coordinator for the Running Room, was the superstar who connected me to Morrie and the KwadSquad when I donated my race bib. My request to Justin was that he pass it along to someone who would enjoy the race as much as I have for the past six years. Justin delivered in spades. 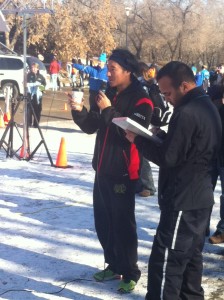 Justin at the microphone, greeting runners as they finished the race

That brings me up to today’s event, where I spent most of the actual race doing something unfamiliar: sitting in a support vehicle. Sitting isn’t something I do easily, but I soon found myself caught up in the excitement of watching for Raminder and the rest of the KwadSquad team, which included Morrie and Tanis, at various checkpoints along the course – waiting for my opportunity to join them.

Although I had met Morrie the previous day when he dropped by with my fabulous new race shirt, I hadn’t yet met Tanis and Raminder. Both are delightful and it was an especially sweet moment when I first got to speak with Raminder and to thank her for letting me run with her. 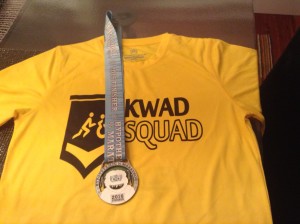 To say that Raminder’s smile lit up the east end of Edmonton is no exaggeration. Wrapped in a sleeping bag that had pocket-heaters planted throughout it, and with most of her face covered, Raminder was toasty warm while her wide, engaged eyes took in the scenery as it unfolded before her.

Although Raminder has speech challenges, she responded in single words, which were amplified by that broad, warm smile. While I was nervous about manoeuvring her special chair with the fat-bike wheels, I also couldn’t wait for my turn to push Raminder for that precious final leg of the race.

And when it finally happened, it was beyond sweet. Even with Morrie and Tanis on either side of me, and with Morrie offering suggestions to help me better steer the chair over the bumpy course, I suspect my amateur “driving” left something to be desired. I’m sure I lack Morrie and Tanis’s skill at the wheel, but Raminder was a generous, kind-hearted rider.

The moment when we crossed the finish line will be forever etched in my heart. It was an incredible privilege and a joy to take Raminder over the final stretch of the course. I was glad I had packed Kleenex too because – wouldn’t you know it – something hit me full in the eye (bugs are common during our Edmonton winter; really!) and it got a little hard to see. 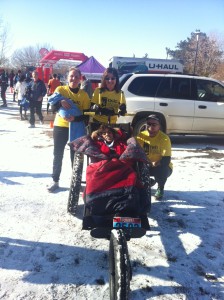 Becky of course was waiting at the finish line and when she asked if it had been a bumpy ride, Raminder answered “yes,” offering a sweet smile in my direction. And then that same bug flew into my eye all over again.

But the privilege of running the course wasn’t advisable just yet, so I had to defer for the time being. Thankfully, running with Raminder and the rest of the KwadSquad team was privilege enough. They are wonderful. I am grateful.

And yes, every race indeed is a story.

One thought on “Hypo Half #7: Every Race Is Its Own Story”