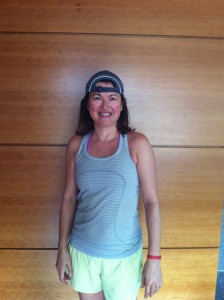 “That writer who runs a lot”

Something I often hear when I first meet fellow-writers in person is this: “Hey, aren’t you that writer who runs a lot?”

Because I regularly post on Facebook and Twitter (@karen_sp_fitz), I’m not really surprised that people know this about me. Still, that comment always makes my heart soar as it captures my two passions: running and writing.

As my title suggests, I plan to do both for life. And thankfully, they complement one another perfectly; I generally write until I need a physical or a mental break, at which time I run. And while running, my children’s stories are streaming through my head leaving me inspired and energized to resume writing by the time I return home. 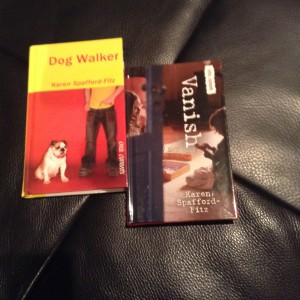 I don’t know how many kilometres I ran before these stories gelled in my head.

While I’ve been writing professionally for over fifteen years, I’ve had a casual flirtation with running for much longer. Then about ten years ago, running became an essential part of my life. Since then, it has helped power me through two published novels, and through several other manuscripts and works-in-progress.

For the past ten years, I’ve not only written many stories and run thousands of kilometres, but I’ve participated in races ranging from five-kilometre runs to half marathons (21.1km) and I’ve loved most of them. As an added bonus, most have supported charities, which means I’ve helped fundraise for wildlife conservation, MS research, teen shelters, breast and “below-the-belt” cancer research, etc. 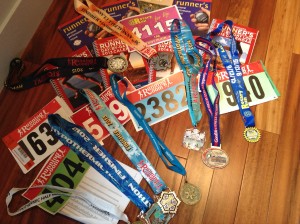 Some of my running logs, race bibs and bling from the past ten years.

To add to that list, I ran a race last weekend that I’ve long wanted to participate in: the Rotary Run For Life in Stony Plain, Alberta.

This event is a fundraiser for mental health issues relating to suicide awareness and prevention–something which I believe few people haven’t been affected by, either personally or through loved ones. That alone felt like an excellent reason to run the event. And so I was solidly in. 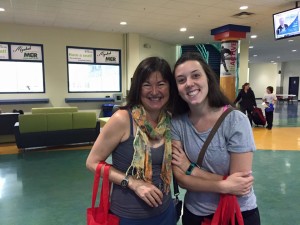 Meeting up with friends at the race kit pick-up the previous day.

With a number of possible distances offered (5k run/walk, 10k run and half marathon), my gut instinct was to register for my favourite: the half marathon. I love the adrenalin-laced starts and the push-till-you-drop finishes, and what I equally love is those long, glorious kilometres in between.

But because I had previously committed to running another half-marathon just four weeks later, I instead opted to run the 10-kilometre distance. My grand plan was to treat it like a speed workout before my upcoming half marathon. 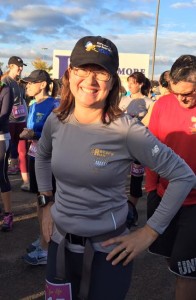 Don’t trust the confident smile. This woman seriously does NOT know how to run a 10k.

As always, I spent some time in the days leading up the race visualizing myself on the course–or trying to. That wasn’t so easily done this time; I haven’t run many 10k’s ever, and I hadn’t run any for at least five years. What does a 10k race even look like? What am I supposed to think about? How am I supposed to feel while I’m running it? As for that post-run program, how does a highly-emotional writer handle that?

I couldn’t come up with any answers so I finally resigned myself to doing something that terrifies me: I would just wing it on race day.

That’s exactly what I did and three days later, I’m still trying to process everything and make sense of the experience. 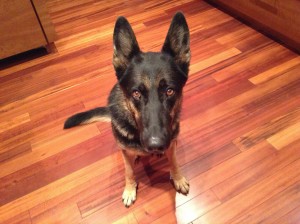 Did anyone ask me how I feel about my mom running without me??? Did they???

Here are the conclusions I’ve drawn:

That a 10k race–ran hard and well–is no easier than a half marathon; it’s just a different beast altogether. (Oh, and mission accomplished with the speed work; met my target time while finishing first in my age category.)

That the memorial markers along the trail honouring the lives of those lost to suicide would make me cry regardless of whether I was running a 10k or a half marathon. And that’s okay.

That Stony Plain is a pretty town filled with gorgeous murals, beautiful old buildings, a bong shop, a yarn store I need to return to, a whole lot of heart, and other stuff too. 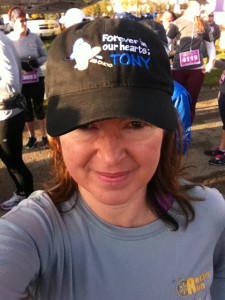 Running for Tony… and others.

That somewhere between kilometres five and six, I found the exact running visual I needed: collecting all of the stigmas relating to mental illness and suicide, and kicking them to the curb. With. Every. Stride.

That the nicest people in the world, as always, are the volunteers directing the runners through the course while cheering us on.

That the “Kwad Squad” push-team athletes who were navigating physically-disabled people through the course in customized chariots are both kick-ass runners and angels in compression wear.

That once I got on the course and started running, everything I’d worried about in the days leading up to it faded away.

That a suicide awareness and prevention event can be a damn good time.

That like other hard issues in our world, there’s only one way to tackle suicide awareness and prevention: together. 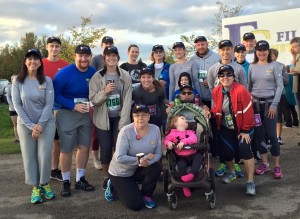 The fabulous Team Amerongen (minus Robyn, who was already running), of which I got to be a guest member. Hurray!

4 thoughts on “Run (And Write) For Life”