Fifteen years ago, I was part of a team of teacher-writers creating curriculum-based educational software for a grade 5/6 literacy project. I was sad when the project ended but delighted that I had finally – FINALLY – figured out what I wanted to do “when I grew up.” I wanted to write for kids. 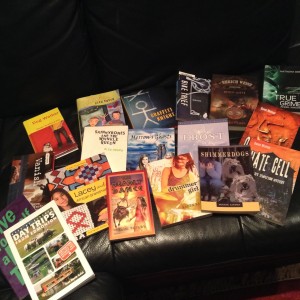 A small sample of kidlit books written by Edmonton and area authors.

My next step was to seek some instruction on writing fiction for children. I soon stumbled across a course called “Introduction to Writing for Young People” at Metro Continuing Education, which was then called Metro Community College.

I immediately registered and on the first day of class while waiting for the other students to arrive (yes, I was the first one there), I became lost in thought while the instructor, Colleen Heffernan, greeted everyone at the door.

Colleen Heffernan, author of Dinosaurs In The Attic, Mill Creek Kids, and A Kind of Courage

I fully admit that I was guilty of what we now call “creeping” people. And I was creeping Colleen hard – my eyes following her every move and gesture as questions swirled through my mind.

How had she started writing children’s books? How long did it take her to write them? How did she eventually tip the odds to become a professionally-published children’s author?

And most of all, if it was possible for Colleen to write several children’s books, was there any way I could do that too? And while I was dreaming anyway, how incredibly cool if, like her, I eventually got to teach a children’s writing course!

Despite hardly daring to believe those things could ever happen, I began conjuring images of my future published books. And just to seal the deal, I also dreamed about someday teaching a children’s writing course.

Minutes later, the class started. Colleen began by describing herself sitting at the back of the class at a Metro children’s writing course some years earlier, looking up at the instructor, Mary Woodbury, and hoping that, like Mary, she’d someday be a published children’s author – maybe even teaching a course on the subject.

So the seemingly crazy thoughts crashing through my head had also crashed through hers? And she’s now the published author of several children’s books AND she’s a children’s writing instructor!

Is it possible that someday those things could happen to me too? Will the Metro tradition continue?

Years later, I’m the author of two upper-middle-grade novels with several others in process, and I’m joining author Rita Feutl in teaching a new course at Metro Continuing Education.

“Kids’ Book Basics: Writing For Children and Teens” begins January 12th and it runs for five consecutive Tuesday evenings. I’m incredibly excited about it and I look forward to telling our students – the next generation of Edmonton area “kidlit” authors – about the Metro tradition, and inviting them to be a part of it with Rita and me. 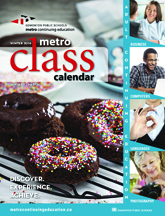 Details about “Kids’ Book Basics” (January 12-February 9/16) found within… if you can get past the doughnuts/”subliminal advertising” on the front cover.

I hope you’ll join us!