A side effect of constant reading is that I’m often in the grips of serious “book crushes.” They sometimes sneak up on me. Other times, they grab me by the heart right from the outset.

Prince Angelica: Camp Catastrophe (Orca Books: spring 2018) is an example of the latter type. From when I first heard about Princess Angelica — the young girl who convinces her bunkmates at summer camp that she is an actual princess — I was smitten. 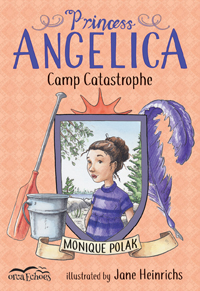 As a child, I spent weeks each summer worrying that my parents might send me away to summer camp. Mom and Dad never once mentioned summer camp to me yet for some reason, it seemed relevant at the time to worry about it. After all, camp would have deprived me of my precious tagging-along-behind-my-big-sister time, plus I was very shy then and couldn’t imagine spending a week living among new people.

So in my eyes, Angelica/Jelly was remarkably brave for going away to summer camp at all. But not only does she go to summer camp, she ROCKS summer camp by spinning the most fantastical stories about living in “a humungous stone castle surrounded by a moat filled with crocodiles,” who of course let her “ride on their backs. They’re better than floaties — or rafts.” And then there’s Jelly’s personal Jacuzzi, “which is constantly filled with jelly-bean-scented bubble bath.” (Sigh.) 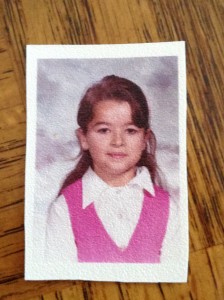 [Above: the shy 8-year-old who would LOVE to have gone to elementary school — and maybe even summer camp — with Jelly.]

Angelica sparkles with the right proportion of sass, whimsy and — when she experiences some pushback about her alleged royal lineage — contrition. Another side to Jelly’s inventive personality is her ability to repair broken objects. This skill comes in handy when she also needs to repair some friendships.

The “story behind the story” is just as delightful. When asked how she came to write this early chapter book, author Monique Polak has this to say:

“When I was 11, I went to the Y Country Camp in the Laurentians here in Quebec and I told my bunkmates that I was a princess. All summer, they made my bed and did my chores. In exchange, I told them stories about the royal court. So there’s a quite of lot of me in Princess Angelica!”

My response when I heard that story was: “Only Monique! Only Monique would think of doing that!”
As for Jelly’s fix-it talents, when a fellow-camper questions her ability to fix the luggage hatch of the bus using a hairpin, this exchange follows:

“Jenna looks really impressed… ‘I guess I thought princesses just sat on their thrones and looked pretty and got spoiled.’

‘FYI,’ I tell her, ‘Princess Angelica is not the sitting-around type.’ “

“Not the sitting-around type” equally applies to author Monique Polak, who has written 23 books for young people. She also teaches at Marianopolis College in Montreal, and writes freelance articles for The Montreal Gazette. And she somehow finds time to review French language YA books for Radio-Canada. I’ve had the pleasure of meeting Monique in person and I dare anyone to try to keep up with her!

Luckily for me and for other readers who adore Monique’s royal protagonist, a sequel is on its way.  Princess Angelica: Part-Time Lion Trainer is due out in spring 2019, and Monique is at work on the third story in the series.

When I asked Monique what she would like kids to take away from Princess Angelica: Camp Catastrophe, she had this to say:

“What I’d like kids to take away is that making up stories is super fun. I have been hooked on listening to stories and reading them, and making them up since I was a kid. I hope my readers will get hooked too. Also, imagination is a useful tool for problem solving.”

Since she has some expertise about imagination that I intend to follow, I will give Princess Angelica the final word:

“I close my eyes. My imagination works best when my eyes are shut.”

Duly noted, with thanks to Monique Polak and to her darling alter-ego, Princess Angelica.