It’s always incredibly exciting and gratifying to introduce a new book to the world. And so… 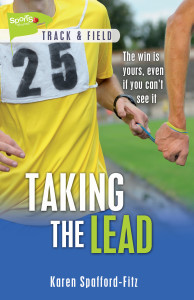 Many people are involved in creating a new book, starting with the author and acquisitions editor, through to the production, design, and marketing people. I’m grateful for the many pros at James Lorimer & Company who were my teammates in bringing Taking the Lead to life.

Here’s a (possibly) little-known fact about book publishing… Sometimes authors don’t create the titles for their own books. I originally called this story Going the Distance. My publisher and editor, however, felt Taking the Lead is a stronger title. I agree with them, although sometimes Going the Distance still slips from my mouth.

Taking the Lead arrived in the world on September 3, 2019–the same day many students returned to school. So, my new book is now exactly one week old. (Gosh, they grow up so fast!)

The book is targeted toward 10-13 year-old students, and is inclusive to those who read reluctantly. I had the opportunity to chat with Tara McCarthy at CBC Radio a few days prior to the book’s release. We chatted about the importance of turning reluctant readers into avid readers via books like Taking the Lead.

Here’s a link to the broadcast:

My interview on CBC Radio

As for the book itself, Taking the Lead features a track star named Jonas Bosch. When the story opens, Jonas, who is sometimes overly proud of his achievements on the track, is unkind to some younger teammates. Jonas soon lands in the principal’s office, where Ms. Oshima further notices that Jonas has also failed to complete his required hours of volunteer work. He is devastated when she pulls him from the track team, although she later cuts him a deal: if Jonas trains Darien, a vision- and physically-impaired athlete, to run a 5-kilometre race, Ms. Oshima will let him compete at the final track and field meet.

At this point, I’d like to share another writerly fact: one of the main jobs an author faces is to make the protagonist suffer. So, I ensured that Jonas and Darien couldn’t stand each other. That made it extra fun [read: agonizing for my protagonist], because Jonas and Darien were tethered closely together for their training runs and the 5k. That meant the two teens had to work out their differences at super close range. (Talk about awkward!)

I won’t disclose anything else about the story… because apparently you can lose your Author Card by giving too much of your story away. But I hope you’ll check out Taking the Lead.

And, if you’re an Edmonton area reader, I hope you’ll join me, along with my adored author-colleagues, Alison Hughes and Lorna Schultz Nicholson, at our two upcoming signings on September 14th and 15th. 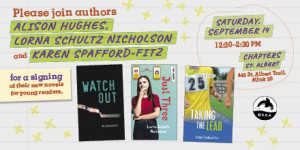 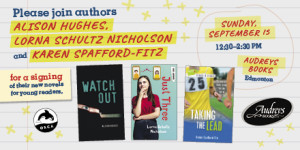 Alison, Lorna, and I would love to see you at Chapters St. Albert, and at Audreys Books. We’ll be signing books, chatting about writing, and generally sharing our love of all things book-related.

On a final, personal note, I will be drawing on PUPPY POWER at those signings… because I recently adopted a new puppy!!! 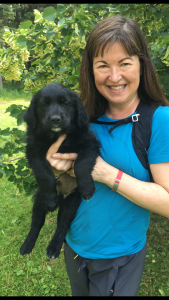 Three-month-old Bowie–a border collie-golden retriever cross, aka “my little rockstar”–is doing his best to ensure his mom doesn’t get toooo much sleep at any one time, while also brightening my days… and tormenting his big sister, Zolli. 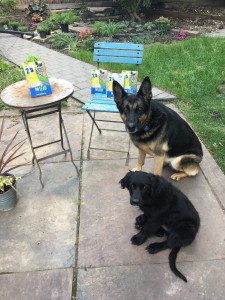 Puppy antics aside, I’m happy to report both dogs/co-writers have fine taste in books!

Hope you’ll join me, Alison Hughes (author of Watch Out), and Lorna Schultz Nicholson (author of Just Three) for our book signings this weekend!

2 thoughts on “Taking the Lead: new book and multiple-author signings”